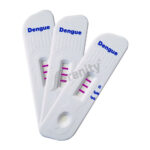 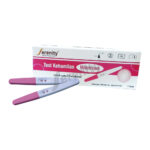 HCG is a hormone produced by the trophoblasc tissue and begin to appear 8-9 days after ovulation or about 4 days after conception. In the 28 day menstrual cycle, ovulation occurs on the 14th day, hCG can be predicted 5 days before the next menstruation hCG levels will increase 2X every 2 days and reach its peak at 7-12 weeks after the last menstruation. then hCG levels will decrease and return to normal after delivery. With this tool, pregnancy can be detected on the rst day of late menstruation. Because it has a concentration of 10mlU / ml. You can nd out about pregnancy even before it’s too late for menstruation.

CAUTION:
HCG levels can also increase in tropholbasc disease or no trophoblassc neoplasms. It is possible that the disease must be removed before deciding that the mother’s caloin is pregnant
USAGE RESULTS:
Pregnant : Two pink stripes appear, one in the test
area (T) and one in the control area (C)
Not pregnant : A pink stripe appears in the control area (C)
Failed : The strip does not appear
USAGE INSTRUCTIONS (Strip):
1. Open the test strip from the package and use it as soon as possible.
2. Dip the test strip into the urine sample for approximately 5 decks
3. Take the test strip and place the test strip in a level place
4. Results will be seen within 5 minutes

You've just added this product to the cart: